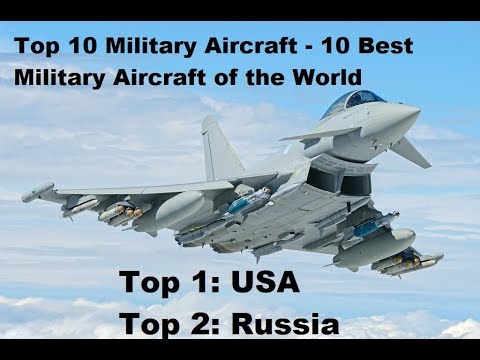 13M 11S
Top 10 Military Aircraft - 10 Best Military Aircraft of the World 10. Saab JAS 39 Gripen (Sweden): Developed by Saab the Gripen (griffin) is a fourth-generation lightweight multi-role combat aircraft. This fighter uses the latest technologies can perform various missions, such as air defense, interception, and ground attack and reconnaissance. 9. Lockheed Martin F-16 Fighting Falcon (USA): The F-16 was lighter, less expensive alternative to the F-15 Eagle. Unlike the F-15, which is purely an air superiority fighter, the F-16 is a multi-role aircraft, capable of attacking air and ground targets. 8 Mikoyan MiG-31 (Russia):The MiG-31 (NATO designation Foxhound-A) was developed as part of an overall programme to provide the Soviet air defenses with the ability to meet the threat posed by NATO low-level strike aircraft and cruise missiles. 6 Sukhoi Su-35 (Russia): The Su-35 multi-role fighter is a significantly developed version of the Su-27. It is being offered for export as a replacement for the Su-27 and MiG-29 fighters. In 2012 it has been adopted by the Russian Air Force. 5 Dassault Rafale (France): The Rafale is in service both with the French Air Force and Navy. This multi-role fighter features some of the very latest avionics systems. Also some measures were taken to reduce radar cross section of this aircraft. This aircraft is very maneuverable. The Rafale can track 40 targets and fire at four targets simultaneously. 4.Eurofighter Typhoon (European Union): Eurofighter consortium was formed by Germany, Italy, the UK and, later, Spain, to develop a new multi-role combat aircraft, optimized as a beyond visual range interceptor with a secondary ground-attack capability. This aircraft carries advanced European-designed missiles. it is fitted with a very modern and comprehensive avionics package. 3. Boeing F/A-18E/F Super Hornet (USA): Currently the Super Hornet is the most capable US Navy's multi-role fighter. It is based on the aircraft carriers can attack both air and surface targets. The Super Hornet is also in service with Australia as the main fighter aircraft. 2. Lockheed Martin F-35 (USA): The F-35, also known as the Lightning II, is a new multi-role fighter. One of its variants, the F-35B achieved initial operational capability with the US Marine Corps in 2015. 1. Lockheed Martin / Boeing F-22 Raptor (USA): The F-22 Raptor air superiority fighter is almost invisible to radars. This aircraft carries a powerful array of weaponry. It is the most advanced and most expensive production fighter aircraft to date. Many of sensors and avionics of this plane remain classified Video shows Top 10 Fighters air shows, bombing actions, take off and landing actions and direction changing actions etc.